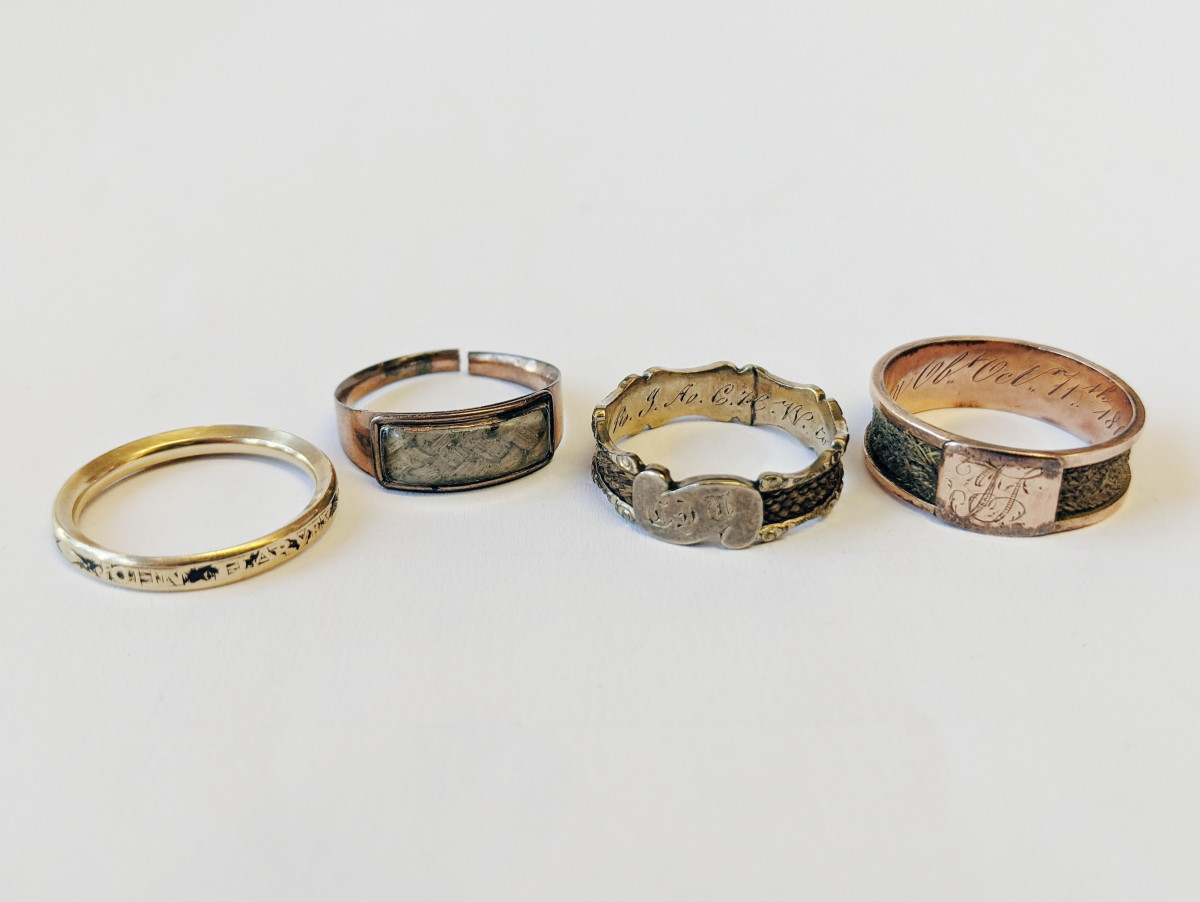 It’s the last week of our exhibition ‘24 Foundry Square: How can one building shape a town?’ here at Hayle Heritage Centre (the last day is Saturday 27th November) and we’re very excited to be adding these newly acquired rings to the displays for the remaining days.

These Harvey/Trevithick family rings have been kindly donated to our permanent collections by Roger Wills, himself a descendent of the Harvey’s of Hayle company founder John Harvey, who received the rings upon his father’s death in 1986.

The Bridal Ring (pictured below) is from the marriage (c. 1760) of Richard Trevithick Senior and Ann Teague, parents to the eminent Cornish engineer Richard Trevithick, known amongst other major accomplishments for building the first full-size steam road locomotive which famously climbed “up Camborne Hill” on Christmas Eve of 1801. There is a shear cut in the back of the ring. This could suggest that it was removed from the wearer posthumously.

The copper or rose gold mourning ring (pictured below) was to commemorate the life of John Harvey, Blacksmith of Gwinear, who founded Harvey & Co. in Hayle in 1779. The foundry went on to become a world-leader in engineering, in particular the production of ships and mining machinery. It’s fame (as well as that of its rival, the Cornish Copper Company) is accountable for the 2006 designation of the Port of Hayle as part of the UNESCO Cornish Mining World Heritage Site.

The second mourning ring (pictured below) was that of Charlotte Jane Trevithick (née Stewart) who died on March 8th 1823, aged 62. Charlotte was born on 15th April 1815 on St Michael’s Mount and went on to marry John Harvey Trevithick, son of Richard Trevithick and Jane Trevithick (née Harvey), proprietor of Hayle’s White Hart Hotel. The gold ring has a “curly” edge at top and bottom, and plaited hair around the outside. The inner surface also bears the inscription ‘J.C.J.R.J.A.C.H.W. to’ with ‘CJT’ inscribed outwith. The initials inside are thought to be those of Charlotte and John’s nine children. Charlotte and John are buried together in St Erth Churchyard.

This slim gold band remains somewhat of a mystery; ‘John Harvey Died 15 Nov’ and the number ‘:50’ can be clearly seen but the ring is well-worn and the inscription sadly illegible in places.

Please do pop down before we close to see these beautiful rings in person and to explore the history of this iconic Hayle building which has dominated Foundry Square for more than 240 years.