You are here: Home / Hayle In 20 Objects / Meal Platter

This meal platter came from The Steam Packet Hotel which stood adjacent to the slipway off North Quay. Evidence shows that an Inn was in existence on the site from the late 17th century and was then known as the Britannia. William Burt held the licence in the 1820s and 1830s and it became known as “Burt’s House”. 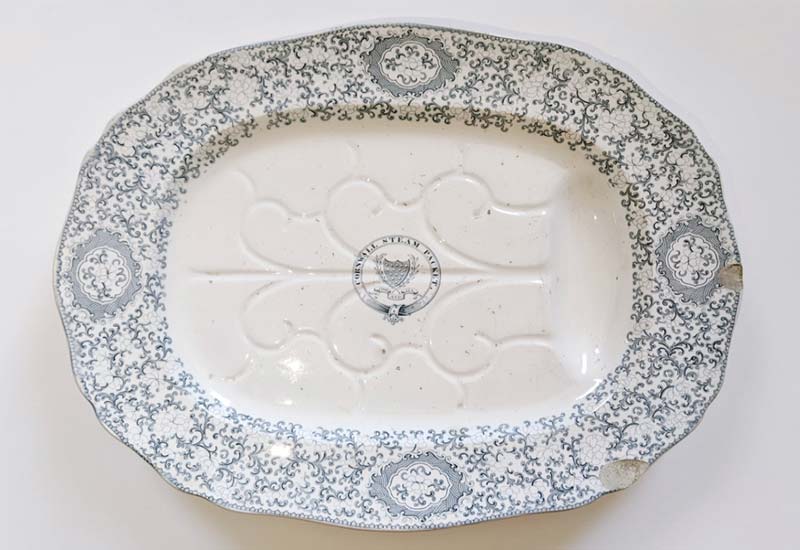 Hayle was fast becoming a successful trading and commercial port with cargo and passengers arriving (and departing) to (and from) all parts of the world.

The Hayle & Bristol Steamship Packet Company ran a successful passenger ship service between Hayle and Bristol with paddle steamers such as the Herald, the Brilliant, the Queen and the Cornubia departing twice weekly from Hayle to Ilfracombe, Bristol, and Liverpool. This service was at its peak between 1831 and 1860. In 1843 the name of the hotel was changed to The Steam Packet Hotel. All passengers departing or arriving on the paddle steamers could take refreshment or lodgings before or after their journeys. Many of those leaving were emigrating, sailing to larger ports before joining ships that would take them to new countries.

With the development and expansion of the railways and rail travel paddle steamer transport became less favourable. When the Cornish Copper Company ceased business in 1867 the freehold of the Steam Packet Hotel was acquired by Harvey & Co. In 1905 the lease was bought by Redruth Brewery who continued to run it as a hotel until 1917 when the lease expired. The Cornish Glass Company rented the hotel and ran it as offices until 1924 when Harvey’s converted the building into flats which provided homes for many local families.

In 1960 the flats were deemed not fit for purpose and in the mid-1960s The Steam Packet Hotel, where many mariners and travellers had found shelter and refreshment, was razed to the ground.