This inscribed brick from the iconic chimneys of Hayle Power Station was retrieved in June 1981 when the twin stacks, a prominent feature of the town’s skyline, were bought down. 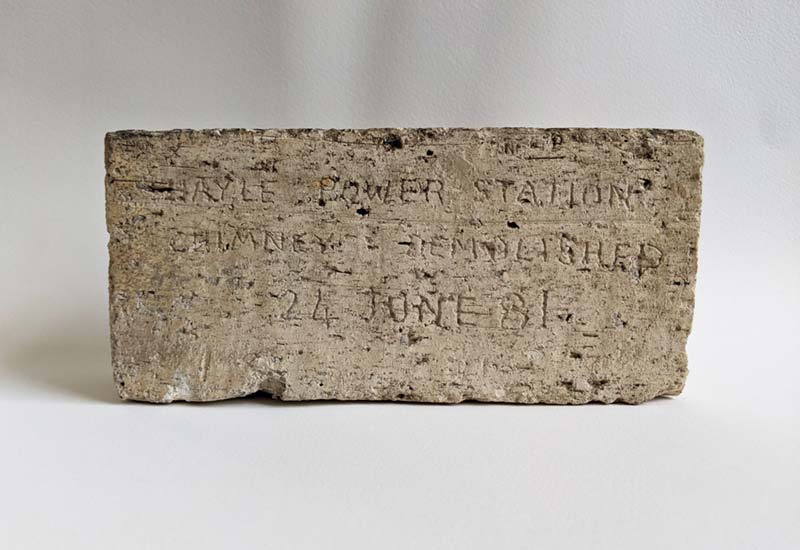 The West Briton newspaper held a competition entitled ‘Blow Me Down’ in which a member of the public was selected to press the button which activated the explosion.

Hayle Power Station (known locally as the ‘lectric works) produced coal-fired power on North Quay for some seventy years. It was built in 1910 on land then owned by Harvey & Co and was connected to the National Grid in 1933, thereby linking it with all the other regional generating systems throughout Britain. It was the only power station in Cornwall to be part of the National Grid.

The Power Station also played a vital role in Britain’s war effort during WWII by supplying electricity and warm sea water (the condenser cooling water) to the Associated Ethyl (later Associated Octel) Works, built nearby in 1939. This factory extracted bromine from sea water to produce anti-knock compounds then used in aviation fuel for the Royal Air Force.

By 1973, modern power stations coming into service throughout Britain left Hayle Power Station largely redundant, resulting in its closure. Eight years later, the chimneys were demolished, and the site soon cleared. This was a monumental day for the people of Hayle and crowds gathered to watch the demolition. Were you there?