You are here: Home / Hayle In 20 Objects / Copper Wash Boiler

This copper wash boiler – known colloquially as a “copper” – was made by the Cornish Copper Company. The vessel would have been filled with water and placed on a furnace for use in a domestic setting for washing clothes. The “copper” was donated to Hayle Heritage Centre after being salvaged by the Trevithick Society from the much-loved Wayside Museum in Zennor. 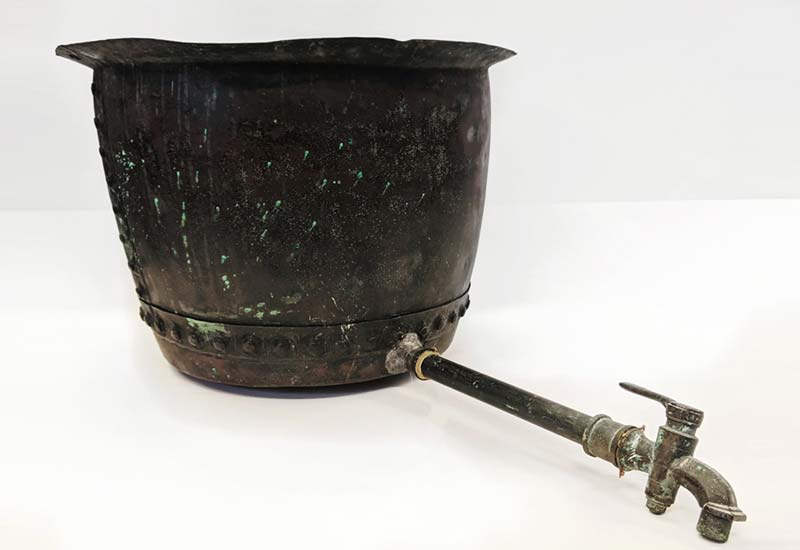 In 1756 the Cornish Copper Company (founded by Sandys, Vivian and Carne) moved from Camborne to the Ventonleague and Copperhouse areas of Hayle. Built in 1758, their site comprised a copper smelting works with 26 furnaces. In the decade that followed, the company grew from strength to strength: in 1769, a canal and dock were constructed in Copperhouse Creek (so that vessels could be brought right up to the works), and land access was improved with “Black Road” being built across the top of Creek. Black Bridge was allegedly altered in the early 19th century to allow William Hockin, Rector of Phillack to pass under in his rowboat. It is constructed entirely of scoria block.

These heavy, black building blocks were cast from copper slag: the waste product of the copper smelting process. The redundant material was put to good use, however, with the blocks being sold at 9d (3p) for twenty or given free to Cornish Copper Company employees to build their own houses.

Copperhouse Pool was soon modified to serve as a tidal reservoir and to keep the channel clear of sand and silt by sluicing.

When John Harvey established his foundry at the western end of the town, the two companies became fierce commercial rivals. They had many disputes over the years, especially over access to the sea as the Cornish Copper Company controlled the dock and the tidal sluice. In retaliation, Harvey’s constructed their own harbour and dock by deepening Penpol Creek. Evidence of their rivalry can still be seen today, on granite boundary stones in the Glebe Row area with the inscriptions “H” on one side and “CCC” on the other.

By 1820, copper smelting had ceased and the Cornish Copper Company became a general foundry and engineering company. They manufactured over 350 Cornish Beam Engines that were sent all over the world.

In 1867 the company closed due to bankruptcy, and the wharves and land were put up for sale and bought by Harvey’s. Vessels were still able to reach the dock at Copperhouse but this dwindled over the years.

Most of the site has been demolished but you can still see Black Road and the bridge, Copperhouse Pool, and the remains of the Copperhouse dock, all of which are built of scoria block: a legacy of Hayle’s colossal industrial past.