These items belonged to David Moyse, who began work at the Associated Ethyl Company (later known as Octel), Hayle, as their Chief Medical Officer in 1954. 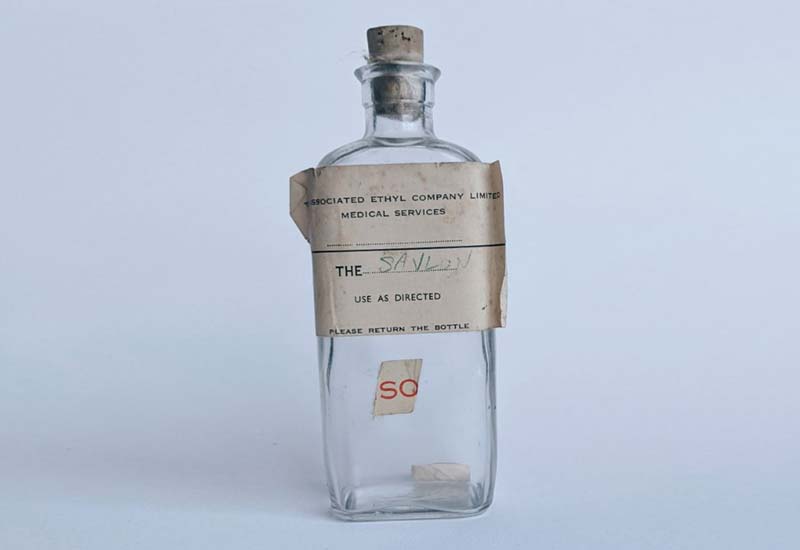 In 1939 ICI and Associated Ethyl started building a plant on North Quay that would extract Bromine from seawater. It was initially owned by the Government (Ministry of Aircraft Production) but designed and operated by the British Ethyl Corporation. Commissioned in 1940 just before the Battle of Britain, it was discovered that a chemical called Dibromoethane was highly effective when blended with another chemical Tetraethyl Lead. This made an “anti-knock” compound that – when added to fuel – increased the power from the engine. This compound was used in military aircraft during the war.

The sea water extracted and used in the plant was first warmed by Hayle Power Station, located just along the quay. After processing at Octel, the sea water was then discharged via an outlet into Copperhouse Pool (pictured).

After World War II, the plant continued to manufacture chemical products which were dispatched by rail tankers and wagons to Ellesmere Port and Northwich (Octel’s two other factories) on a spur line from the old wharves branch that came off the main railway line at Hayle station.

Octel employed a large, local workforce. Due to the hazardous substances – such as Sulphuric Acid and Chlorine – on site it was essential that the plant had a medical officer and treatment room on site to deal with any medical issues that occurred.

By 1973, the cost of replacing aging equipment resulted in the decision to close it down and move the work to other plants across the country. The site was cleared by 1974.